This was a Tuesday 29th of August,2017 when a group of international journalists and travel bloggers were priviledged by the Rwanda Development Board(RDB) to visit the Akagera National Park, a 1122sq km savannah wild land located in the north east of Rwanda in the Eastern Africa.It is named after the Akagera River that flows along its eastern boundary and feeds into a labyrinth of lakes of which the largest is Lake Ihema. The forest fringed lakes, papyrus swamps, savannah plains and rolling highlands combine to make Akagera amongst the most scenic of reserves anywhere in Africa.

My experience did not start really with the wild adventure, but if i could start with the beginning,cronogically the Akagera Game Lodge would come first.

With an attractive setting on a ridge overlooking Lake Ihema(the 2nd largest in Rwanda),Akagera Game Lodge is within the boundaries of Akagera National Park’s south entrance(around 12mins).

The Akagera Game Lodge inside the park.Photo:Cyril NDEGEYA

With affordable room rates ranging between USD 100 – USD 170, it is the best and only place to spend the night if you’re not a fan of camping because this option is also available inside the park.

Back to my experience with this hotel,I would recommend to you if you happend to be a nature photographer and you spend a night there, please please don’t miss the stunning Sunrise that you can capture from the restaurant’s balcony which gives you a wide view and a nice composition of the hotel’s swimming pool,Lake Ihema and the redish sky exactly when the sun raises, and this mostly between 5:30 – 6am.

A sunrise view from the hotel’s restaurant (notice Lake Ihema just behind the pool).Photo:Cyril NDEGEYA

Now Lets start our game drive in the park

This is around 7;30 in the morning after a heavy breakfast from Akagera Game Lodge.The very first point is the briefing that all tourists get from the park reception by a guide who is assigned to you before you start the visit in case you are not sure to make it with a self guided tour.

Our lovely Community freelance guide Mr. Anaclet Nsengiyumva, gave us all the necessary informations to know  about the park for about 20 mins,when all of us seemed to understand , he entered our car and here we go!

As curiosity is always embedded in every tourist’s genes,we were expecting to see either lions, big cats or a group of elephants at just 500m from the starting point,and as most of the journos were visiting this park for the first time, many of them were asking our guide Anaclet questions like ” Are we about to see lions around here?” or shouting…”Driver, slow down! we don’t want to miss rhinos pictures”!…

Later Anaclet told us that most of animals are found when you approach the northern part of the park(where we were heading to)but on the road we could see vervet monkeys and young impalas in different groups atleast every 800m.

A young impala scratching his front, These are one of the most hunted by predators in the park.Photo:Cyril NDEGEYA

The park having two differents routes connecting Southern entrance to the northern exit, we chose to go by the lower road along the lake shores, this one is longer but offers glimpses of lakes through thicker vegetations.An example is Lake Mihindi which is in the northern part of the park,every tour guide will take you to this lake for which the south east shore is know as Hippos beach! at this place , tourists can get out of their cars and enjoy a closer view of groups of hippos resting around with some sea birds feeding from their rich skin in insects that the birds look for. But this time of our visit, we even captured three crocodiles also simply laying at the shore of the lake, again for photographer to get close shots of these wild creatures, a tele-photo lens of at least 400mm is necessary.

Few mins from Lake Mihindi, we heard our driver Kayitare shouting ” Ingwe , dore Ingwe!!” meaning ” leopard, leopard!”…every one jumped to the car windows and guess what?..An adult Leopard was just seemingly sleeping under a tree near the road, and apparently she had not seen or heard us approaching, she was surprisingly waken up by the sound of many clicks from our cameras and at least 15 lenses all pointing at her! in less than a second, she jumped 3 meters away and fixed us with a scared face in the beginning, looked around and realized it would run into the open space(which had been put on fire for new fresh grass to raise), so the big cat decided to cross the road in front of our car for the other side of the road which more easier to hide from, and this was my first biggest surprise after 3 previous visits in this park. 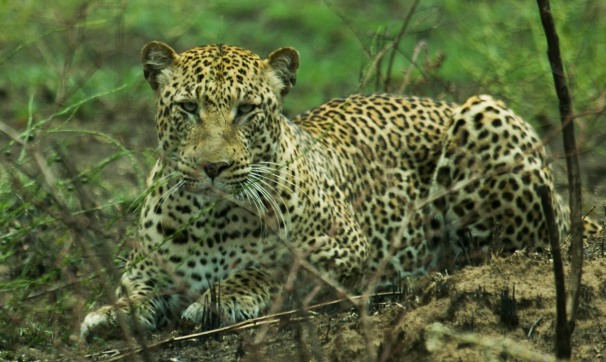 My first live eye contact with an adult leopard not far from Mihindi lake, these predators are also known as Big Cats.Photo:Cyril NDEGEYA

…Looking at us with a very suspicious eye.Photo:Cyril NDEGEYA

Let me then jump to my breathtaking surprise of the day as i’m wraping up my journey!

Towards the end of the visit , we crossed a vaste plain known as Kilala Plain, which is usually a resting plain for most of herbivorous animals because its a good wide open space for animals to spot predators from far.
Being a picnic area, we also had to enjoy our lunch here after a loong drive which left us really starving, but while i was having my chicken piece embedded in a toasted bread, i looked behind and saw two buffalos just resting, I almost panicked thinking wherever a buffalo sees you it charges you, but i was wrong! 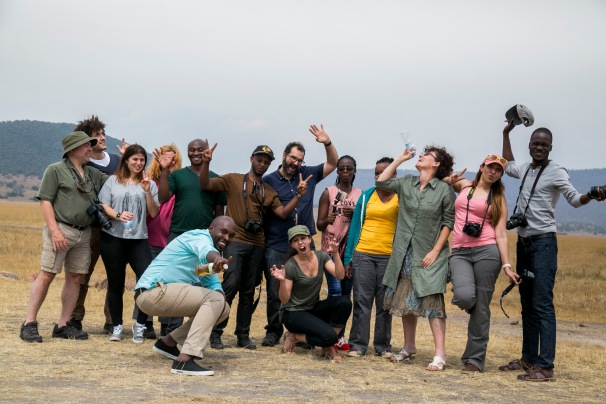 At that moment we didn’t know  yet what was going on about 200m behind the buffalos,only 2 mins after we left Kilala plain,a staff of RDB Mr Moses shouted “A lion, a lion”!! I couldn’t believe him since a number of reasons were crossing my mind in that moment: we were at few kms to the exit of the park and we had drove about 6 hours without seeing any sigh of lions, and having heard from other tourists and guides that the chances to see lions in Akagera park are very minimal unless you spend about 4 days in the park! so i thought this was just a joke but i finally grabbed my 5D MarkIII camera tried to change settings just in case the joke is not jocking at all, and as our driver was slowly advancing…Ouf! my longtime dream became true!

A male and female lions(Shema and Ngabo)had just killed a female topi and was starting devouring it just 3m next to the road!in just 5 secs, i think 200 pictures were already taken by all the cameras in the car(i let you imagine the sound of professional camera clicking at the same time at a minimum of six frames/sec)!

At that moment Ngabo(the male lion) hesitated to keep eating up its prey and it immediately went to hide behind a bush,while Shema(the female) pulled back 2 meters but did not want to leave their fresh prey at the mercy of curious unkown human beings, so she just sitted around waiting for who could dare and approach!
We had an idea of driving back at 100m for the predators to feel secure and come back to eat,a plan which worked 3 times! we were also coming back and stop the car at the same place , take pictures of every move of the lion’s mouth but this was only Shema which was apparently really hungry because Ngabo was just observing now from 30 meters away 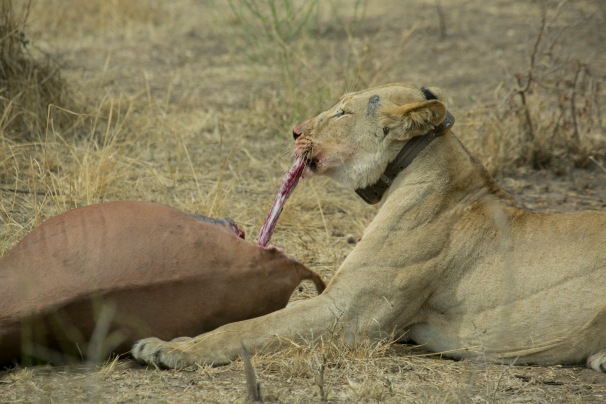 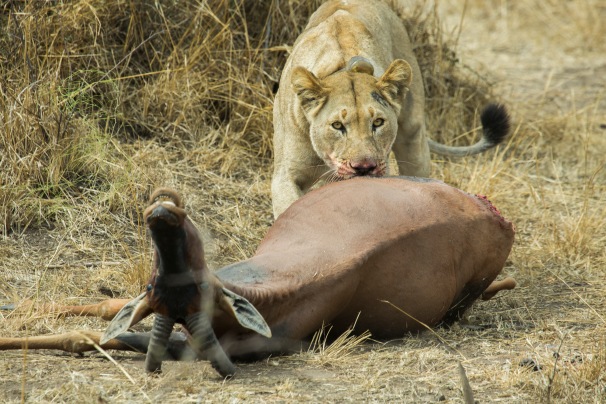 Shema was trying to pull her prey back into the bush behind fearing that we could be a real threat to her security.Photo:Cyril NDEGEYA

When we felt we had all the pictures we wanted, we thought it would be a good thing to let the lions feel secure enough and finish their lunch, and we decided to leave, but anothe scene i will never forget is that tens of other topis and zebras were uniformly standing in the valley at about 300meters away, all in what seemed to me as a mourning moment for their colleague whom they waited for long and finally did not come,it was clear that they were aware of what had happened to their sister, I felt shocked and really sad to see that scene which again reminded me how life is so precious and how it can be lost in less than a second, but again this is the jungle laws, only the powerful leads!

A group of topis in a big shock after realizing that their sister topi which was probably grazing with them few mins before will never come back.Photo:Cyril NDEGEYA

On the other side i was extremely happy to see a lion for my very first time plus a lion with its prey, and this was very encouraging for visiting different parks around the globe to see this other side of wild life.

10 comments on “My big surprise in Akagera National Park”